How to Respond to Disappointment

I can still feel Colorado when I think about what it was like to live there. Unfortunately, I don’t mean how I felt seeing how beautiful it was or the cold mountain air or anything awesome like that. When people ask me how it was living in Colorado, I tell them that I wouldn’t know. I lived at seminary, the Chick-Fil-A where I worked and the church where we attended and volunteered. Those things happened to be in Colorado, but I was way too busy to notice.

When I say I feel Colorado, I mean the pain that I felt in how hard that season was. It started bad and got worse. The reason I was there was to finish seminary, but I had hoped to do that remotely with my new small groups pastor job at my church in Conway. I didn’t get the job. I actually didn’t even get interviewed. It was hard and hurtful. The first real disappointment in my life. Then we moved…in with my in-laws. They were great and generous to do that, but it’s a shot at the manhood regardless. I was delivering pizzas for a boss 10 years younger than me. My car broke down and couldn’t be fixed. The car we replaced it with stranded me 6 times in a year. Right before we were about to sell it, it literally blew up.

How did I respond to this? Short answer: poorly. Another short answer: whining. I was so good at having a pity party. I cried a lot and I yelled a lot. At 28, I was unprepared for this level of disappointment. I lacked the courage that was needed to face adversity and learn from it. Rather than allowing God to use it in my life, at least for a season, I allowed it to wreck me.

I take comfort that I can say that I was like Joshua, one of the greatest leaders in the Bible. Unfortunately, I’m comparing myself to his worst moment, but at least I can say that I am like him. Joshua and the Israelites had just seen God do an incredible miracle at Jericho. Now they were on to Ai. Unknown to Joshua, Achan had stolen some of the treasures that God had forbidden. As such, when they attacked Ai, God wasn’t with them. (A fact that Joshua could have known, if he had consulted God before the attack on Ai. Instead, he rushed in and attacked, forgetting that it was God that had brought them victory, not their soldiers or his military acumen. Another great lesson for another day.)

After their defeat at Ai, Joshua goes straight to whining and complaining mode. He tells God that it would have been better if they had never come to the promised land at all. He questions God’s integrity and wonders why God brought them all this way just for them to be wiped out. Questioning God’s integrity is never a great option. God, however, is gracious with Joshua and explains Achan’s sin and the solution for Joshua.

What should Joshua have done? Said another way, what should we do? When a plan we are convinced is God’s plan goes wrong, what is the right response? When severe disappointment comes, what do we do?

1) Remember what God has already done. One disappointment does not negate what God has already done in your life. God had just brought down the wall of Jericho. He is still the same God. The same God that has brought you to where you are and loved you and served you is the same God that is with you now. You may not understand the what or the why of what’s happening now, but the character of God is the same.

2) Stop and ask God what’s going on. The question is always asked, “Why do bad things happen to good people?’ The answer is both simple and complicated. The simple answer, as with most deep questions, is that it depends. The complicated answer:

3) Listen to God and trust him. Too often we can pray and ask God a question but we fail in the obvious next step– listening. God will answer you. I can make no guarantees on his timing, means, or favorability, but I can guarantee an answer. When faced with disappointment or a trial, reach out and then listen. Then trust whatever he says. Don’t go where Joshua went. He led with a distrust of God. He believed the worst first. Even in that, God met him and gave an answer. Then we see Joshua choosing to trust and follow again.

I am walking through a lot of trials with different people right now. Some are doing well and some are not. The difference between them is simple–they have the courage to trust and follow God. 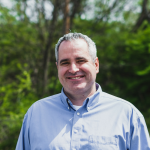 Lead Pastor at The Grove Church

Charlie has been married for 20+ years to his beautiful wife Heidi and they have three awesome daughters, Maylee, Lauren and Laylah.  They moved to Northwest Arkansas in 2010 to lead The Grove Church and have loved every minute of it.  In addition to being a pastor, Charlie loves Razorback basketball, 80s music and movies, lots of movies.  However, his greatest passion is helping people find Jesus and then find their role in the awesome life that God has for each one of us.