Why Your Church Needs a Security Team

It was a beautiful July morning. The sun was shining and the birds were singing and we had a full auditorium of worshippers. We were about mid-way through our pastor’s message when an usher noticed someone entering the auditorium carrying a backpack. She tried to engage him in conversation to see if she could find him a seat, but he just shrugged her off. She had never seen him before and felt uncomfortable with his behavior, so she decided to notify the head of our Security Team.

While she was approaching our Security Team Leader, the “stranger” walked down the side aisle of our auditorium to the very front, stopped directly in front of our pastor, took a leisurely stretch, and then walked to the other side of the auditorium and sat in the front row. I’m pretty sure no one was breathing at this point.

Meanwhile, our newly-formed Security Team launched into action. We had only established the Security Team two months prior to this incident. We were blessed when four members of our church who also happened to be officers helped organize a team. Those four officers carefully selected four more men from our congregation who were interested in helping with security to join the team. As word spread that we had a dedicated Security Team, other men came forward to express interest. So, we set up a protocol to help men (or women) begin the process of becoming a team member. These were our criteria:

While those may seem like pretty hefty requirements, we feel like it puts everyone in our congregation at ease that the people on the team have been fully vetted and are prepared to protect them if the need arises. We do pretty extensive training with our team at least twice a year. In addition, all of the non-officers on our team have passed the Air Martial certification. We hear often from people in the congregation how much they appreciate having the Security Team present on Sundays or any major events that we have at our church.

Each team member is issued a special black shirt bearing our church logo, but nothing explicitly identifies them as “Security.” They each carry radios and are assigned a specific Sunday each month and serve the duration of the morning through all services. We currently have 13 members on the team with several more in the on-boarding process. It’s been an overwhelming success thus far.

So, that July morning, as everyone in the congregation collectively held their breath, our four officers quietly walked down and sat with the stranger, engaged him in conversation, collected him and his backpack, and left the auditorium. After searching the backpack, they found in it an airsoft pistol. He admitted to having lapsed in taking his regular depression medication. Ultimately, the crisis was averted, but there was a cost. People were scared and on edge after that. Several families had actually gotten up and left during the whole episode. It’s an all-too-common thing happening in our world and even in our churches.

I am so thankful for a Pastoral Leadership Team that was supportive of the need to begin considering security at our church. The team has been used in some amazing ways since we started it almost two years ago. After a recent women’s conference with almost 1200 ladies in attendance, one woman took the time to write a personal thank you note to every guy who served on the Security Team that weekend (There were 10 of them!). She wanted to express how thankful she was to see them walking around keeping us all safe.
She speaks for all of us!

We feel it is necessary to also train our church of almost 1500 what to do in the case of emergencies such as a fire or tornado or an active shooter, so the Security Team has begun training different groups of people in our church what the protocols are for those emergencies. So far, they have trained about 200 people from our congregation with more training sessions scheduled for this fall. It is our desire for our church to not only be a safe place spiritually but also physically. If you would like to learn more about some of the things we are implementing, feel free to contact me. 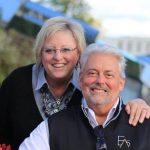 Laura is on staff at First Baptist Church where she oversees the Guest Services Program and serves as the Executive Assistant to the lead pastor, Phil Byars.  She is married to her high school sweetheart and has 15 grandchildren.